2020 JUNO AWARD WINNER FOR REGGAE RECORDING OF THE YEAR

HURON COUNTY – Brussels resident Lyndon John X has won a Juno award for the self-produced, full-length LP, The Warning Track, on June 29, 2020. This was his fourth nomination for the Canadian music award in the Best Reggae Recording of the Year category and his first win, his 2019 release taking the highest honour. The event was virtual this year, due to the current situation, with the world gripped by the COVID-19 pandemic. John wasn’t even watching, he was downstairs in his basement studio, working on some new music when he heard his family cheering above him. John told the Wingham Advance Times in an interview, “I’m still so shocked with the Juno, but so excited and grateful.”

Music has been an integral part of Lyndon John’s life since he was a young boy growing up in the 1970s and 80s in Cambridge in a home filled with R&B, Reggae, and Calypso music. His formal interest in music began at the early age of 5, when he started lessons in violin and piano. Lyndon later took up guitar as his instrument of choice, and has been writing his own music since age 16.

Fast-forward to 2007, when the multi-talented vocalist, songwriter, producer and musician made his debut on the Reggae music scene in 2007 with the release of his critically-acclaimed debut album, “Two Chord Skankin’”. The project earned him a 2008 JUNO nomination and a nomination for Best Male Newcomer at the 2008 Canadian Reggae Music Awards. He followed that album up with two more albums, “Brighter Days” (released 2010) and “Escape from the Mongoose Gang” (released 2015), both of which received JUNO nominations the years following their release.

John described his journey from Toronto to Cambridge and then to Brussels as his career and his life that led up to this moment.

As an independent artist in a niche genre within the Rock-centric Canadian music scene, Lyndon and his team have worked tirelessly to deliver original Roots Reggae to the masses and help the genre gain more widespread exposure on the Canadian music stage as well as on an International level. The multi-talented vocalist, songwriter, producer, and musician has been into music since he was a young boy. Soft-spoken and humble, John described his journey from Toronto to Cambridge and then to Brussels as his career and his life that led up to this moment. John “started with music very young, beginning at the age of 5 with the violin and piano. Shortly after, he started playing the guitar, which he continues to study, according to his Facebook page. Through his Grenadian parentage, he was introduced to Calypso and Reggae music. Reggae music seemed to become part of him, as it carried through while playing in various Jazz and Blues bands. At the age of 16, he recorded his first single titled ‘All My Lovin’, which also appears on his debut album, Two Chord Skankin’, released in 2006. He went on to release Brighter Days in 2010, and Escape from the Mongoose Gang in 2015, all being nominated for the Juno award. Heavily influenced by the likes of Bob Marley and Peter Tosh, John said if he had the chance to collaborate with anybody, his first thought was Damien Marley. Lyndon John X working on some new music in his studio at his home in Brussels. (Cory Bilyea Photo) He also likes an artist called Protoje, a reggae singer and songwriter from Jamaica. He loves the laid back, chill attitude, and delivery. “I always say that good music is almost like when your mother or your father was scolding you and the things that they would say to you as a West Indian parent would.” John said, “it almost sounds like that when he’s telling you stuff.” “Those two guys,” he said, “I love the delivery, I love them.” 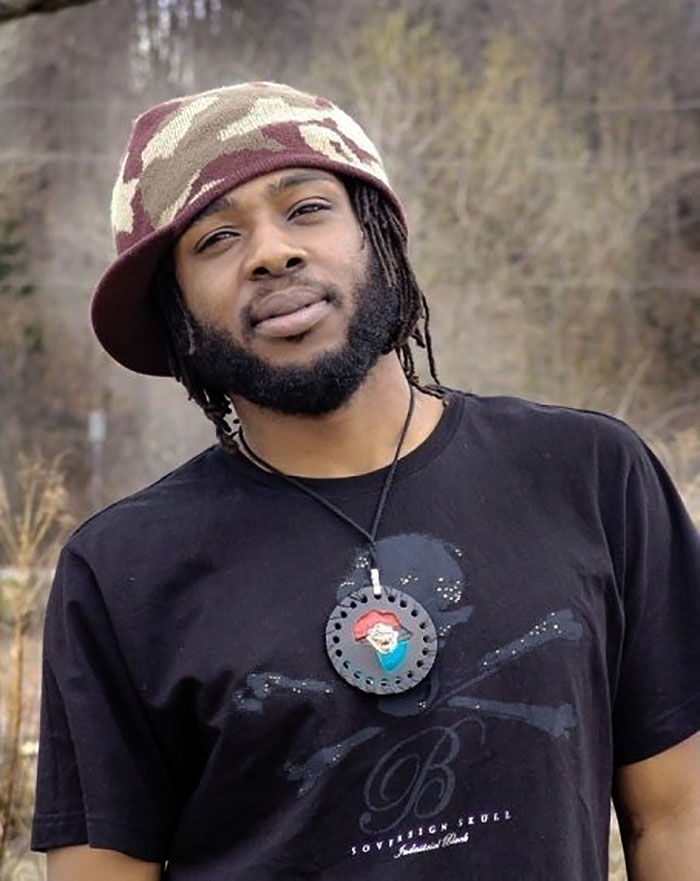 Looking back, if he had one thing that he would advise his younger self to do, he said, “Oh, I would have practised a lot more. Like, a lot more, as a kid.” John played a lot with other bands in high school. Every year, until he was 16, he remembers entering and winning music competitions but thinks he should have practised more and also, “I would have told myself to get into the engineering.” His first two albums were created in Toronto and were very time consuming and expensive.

John burst into the Toronto music scene in 2007. “Working with the list of talented musicians was a great and long overdue experience.

His first album took almost 3 years to make, plus he had to learn the ropes of the business. He found that locating musicians was one of his biggest learning curves. When he first got to the city, he started searching for musicians to back him, but he wasn’t sure where to look. “There was this music scene,” he said, “so, where do I find a great drum and bass to play reggae music?” He laughed, “I didn’t know you could look in the paper, and there they are.” Then one day, he went to a studio, and “it kind of fell in my lap.” He burst into the Toronto music scene in 2007. “Working with the list of talented musicians was a great and long overdue experience. It also provided him with a solid roots foundation of players he needed to make this album what it is, all original music, lyrics, and roots reggae vibes,” according to his page. While he has enjoyed meeting and working with these musicians, John would love to have a group of people to work with regularly. He would like to have a band that was playing together all the time, “like you have a group that you can meld your music with every Wednesday night, you’re sitting there and you’re ironing out the fine, fine details.” “I find so far with the festivals that I’ve done and the way that they’re structured, they’re so fast. You go in new. You practice for 15 minutes. And that’s your show, basically.” John added, “You don’t get to really hold on to the music and squeeze it down.” While it would be more expensive, he would be okay with that because “you get to harness your music.” He moved with his wife and their 3 children to Brussels over 10 years ago when they found a perfect house close to a school. They love the small-town atmosphere, the laid-back easiness of living a quiet life, away from the hustle and bustle of living in a big city. He likes the beach and the atmosphere in the summertime. “It’s just nice, you know, I mean at night the stars are really doing it out there. It’s cool.” He loves to sit by a big fire in the backyard with his family. While John wasn’t prepared for the amount of snow that the area gets, he does appreciate that it is clean and beautiful compared to what the city gets. He does miss it sometimes though and likes when he gets the chance to go perform or hang out in Toronto. He built a home studio in the basement and has invested his time and money in learning the logistics and engineering of producing his work. This has been much more cost-effective for him and he finds the accomplishments rewarding, as he can be home more often and spend extra time with his family, who he adores. His children, now seventeen, fifteen, and thirteen are “excellent people.” He said, “I just love hanging out with them.” He missed doing this while he was working in Toronto. When they were younger, he said, “I wondered if they’re watching, like, Scooby-Doo or something, because I used to like watching those cartoons with them.” Now they are teenagers he laughs, it sounds more like, “Did you see the new slasher movie:”

John recently released a video and is working on another one, due to be released with his new website soon.

When asked about his musical process he said, “usually it’s the bass line I think of first. I’ll think of a bass line in my head and then I’ll grab my guitar first and from there I’ll come up with some chords to go along with the bass line.” There are usually only 2 or 3 chords and progressions aren’t really that huge he said, “But it’s usually a groove that I’m trying to make, a nice bassline over a reggae groove.” Then he tries to get the words to fit over the top of it. “Because to me, when I listen to reggae that’s been done very well it’s always the rhythm that hits me first. It’s always that first introduction.” Locally, before the pandemic, he has performed for several functions from art awards to small gatherings. His most memorable gig was a thing called Jam Land. “I can’t even pinpoint exactly where it was. Stratford area, I think. I was out in the woods and they made the stage out of the woods and they had the sound guy in a treehouse.” He said, “Beside where we’re playing, they had this huge dreamcatcher and it was like, going with the music. Behind was the stage where they had a psychedelic kind of backdrop and they had people dance and all you could see was their silhouettes. It was the craziest festival I’ve ever been to.” John recently released a video and is working on another one, due to be released with his new website soon. He looks forward to a time when reggae music is as common here in North America as it is in Europe and the U.K. He plans to keep pushing forward with this initiative, by advocating for more exposure and radio play, even a radio station that is dedicated to this type of genre.